so it has been a while since i posted anything in here >u< i was quite busy with kimono the jacks what was really awsome =D! i'll share some photos of them >u< in order of happenings =D be aware though! there is allot to talk about and allot of pictures >u<! But please enjoy =D!

it was allot of fun but sadly the blossoms didn't bloom yet ;u; though the sun was overflowing that day which made a nice day for picknics =) This year again the festival was kept sober, and they placed a monument for the tsunami disaster from last year. It was lovely to see it ^^ also a thing i didn't like was that we were an attraction for photographers haha x'D we did get 2 publications in newspapers though >u< that was really an honor =D! also there were some stupid ladies telling us to keep away from officials. since we could 'offend' the japanese guests. But from what i know they love it if others wear kimono, and i was right ^^ we did keep away from officials unless they approached us on their own. 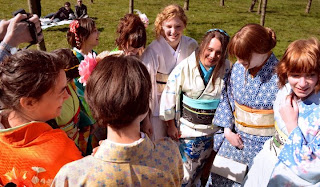 lovely happy group photo!! i loved this one allot =D! this one was made when we were doing our famous tabi shot >u< 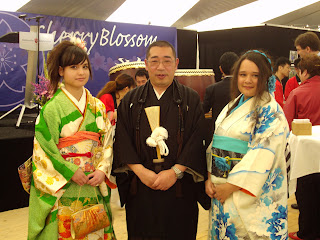 the shinto priest approached me on his own and told me i looked pretty <3 he was trying to tell me what he was wearing too >u< a little bit after that i asked him if we could take a picture together and he agreed >u<! he was such a cheerfull man! 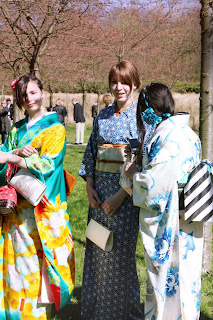 here you can see my hairdo really well <3 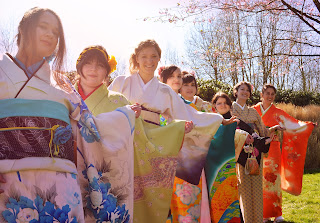 and another LOVELY sleeve group photo <3 i absolutely love love love this picture >u<! so dreamy =D! 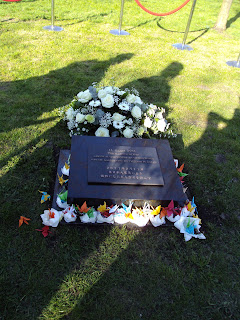 this is the monument i was talking about earlier. I really loved how it looked with all the cranes and lotus origami >u<


cherry blossom festival hasselt:
this festival was much more cheerfull! they did say a little about the tsunami at the opening of the tori, but aside from that we didn't hear anything of it anymore. Also they built a little shinto shrine in the garden to pray for the japanese people. But this festival had the things that the amstelveen festifal didn't have anymore since the tsunami: a festive mood. There was a shakuhachi player (flute) and an awsome taiko performance >u<! This japanese garden seems to be the biggest in europe and it was indeed huge! And lovely too. Though carolien said it would probably be prettier around may and june and i agree. Then all the leaf less trees and flowers will be in full bloom =)
anyway on to the photo's! I actually don't like the photo's much on this event from myself. I look way to serious on the photo's xD! but i have a few were i do look okay on, so i will show those. And also i didn't like my outfit as much as the rest of us were dressed so subtile ;u; 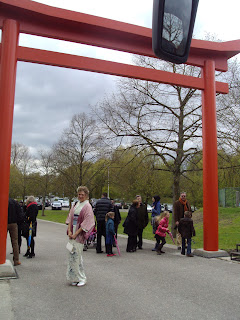 carolien with the just opened tori 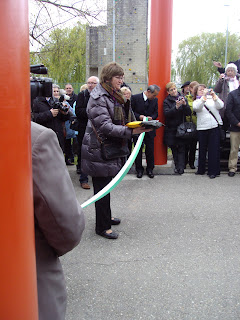 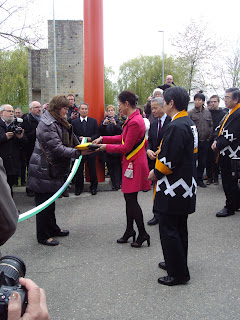 and the officials opening the tori ^ 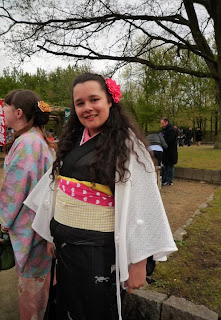 a decent photo where you can see my self made obi really well ^^
i also used a glittered bead as obidome ^^ I chose this colourfull outfit because i wanted to celebrate spring ^^ though this outfit was WAY to cold with that cold wind and low temperature
i used 2 kimono here: an hitoe synthethic white kimono and over that a black ro kimono. I thought it would be warm enough but i was absolutely mistaking x'D 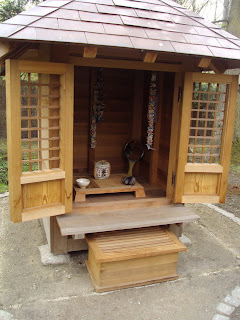 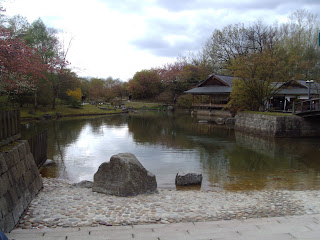 < the little shinto shrine and the koi lake ^ 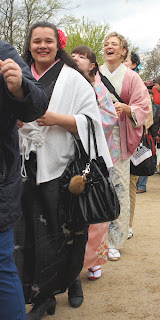 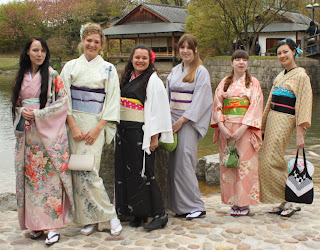 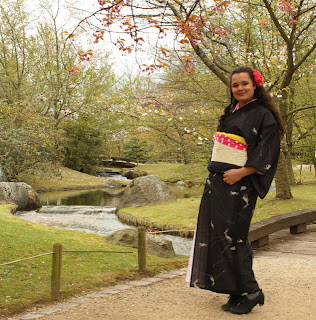 Shokugan Teahouse opening:
this event was yesterday! We all decided to wear iromuji today so it was allot of fun to see the same kind of kimono back on the photo's <3 anyway this event was fun because of the many workshops and demonstrations =D though after this event i was dead tired haha =D! I love how most of the photo's turned out on this event unlike the last one >u< I also have cut banks after a long time, which you can see back in the photo's >u< 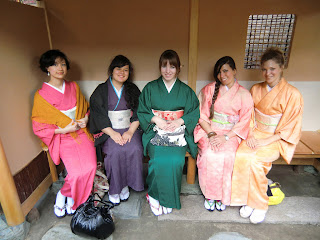 group picture in the machiya: a waiting house for the guests in teaceremony =) I really like how this picture turned out, and also i look elegant for once in my pose ^^ 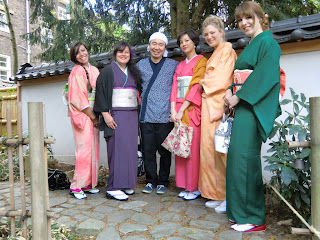 a photo with the sushi chef from japan ^^ he said that it was a dream come true to see so many girls in kimono at once >u<! so he HAD to have a group photo with us =D he was a funny guy >u< bowing deeply for us while giving his buisness card, and even giving us sweets as a thanks ^^! 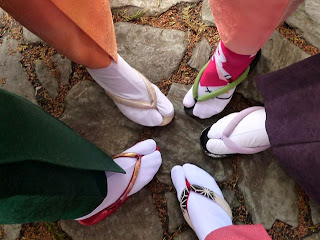 tabi shot of us all >u< i wore my geta in a long while since last time i wore them my feet died. So i was scared it would happen again =) but gladly i could walk around on them all day without worries/pains. I figured as long i don't walk to fast on them i am able to walk on them for longer periods just fine ^^b 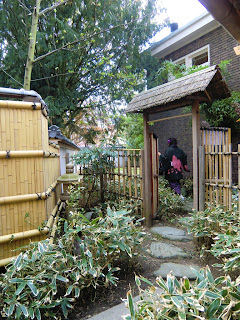 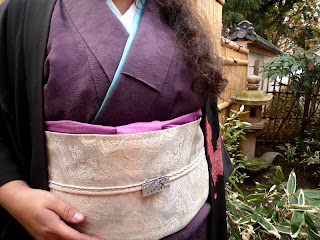 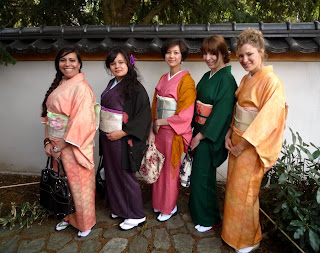 a group shot again ^^ i really love the colours we were wearing together like this >u<!! and i loved the colour combination on tulay her outfit (girl to the most left) 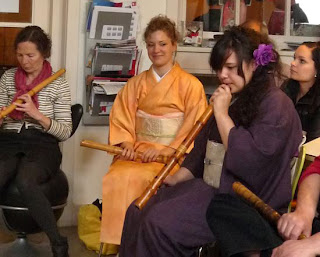 me blowing on the shakuhachi. It was really hard to get a sound out of the flute but it was a really pretty sound <3

i actually really liked this photo because you can see my hairdo really well >u<! 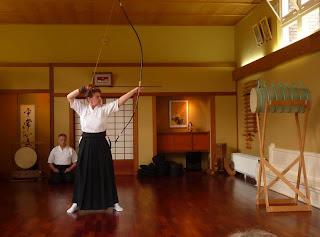 and the kyudo workshop/demonstration. This was really cool to watch!! I have been wanting to see this in real life since i got interested in manga! and that was around the age of 15/16! I always read about this sports in manga and it always looked so elegant and it really is <3 also in real life! The movements are really hard though! It is really intense even though it looks really 'easy'

so this was it for the events! i will dedicate my next entry to the man kitsuke i did, with girly items, and will also show my self made reversible tsuke obi i have finished not to long ago >u<!

till next time everyone and i hope it was interesting to read =)!